This project has inspired others to pursue similar endeavours.

The Sun Ultra series is a discontinued line of workstation and server computers developed and sold by Sun Microsystems, comprising two distinct generations. The original line was introduced in 1995 and discontinued in 2001. This generation was partially replaced by the Sun Blade in 2000 and that line was in itself replaced by the Sun Java Workstation—an AMD Opteron system—in 2004. In sync with the transition to x86-64-architecture processors, in 2005 the Ultra brand was later revived with the launch of the Ultra 20 and Ultra 40, albeit to some confusion, since they were no longer based on UltraSPARC processors.
From Wikipedia: Sun_Ultra_series 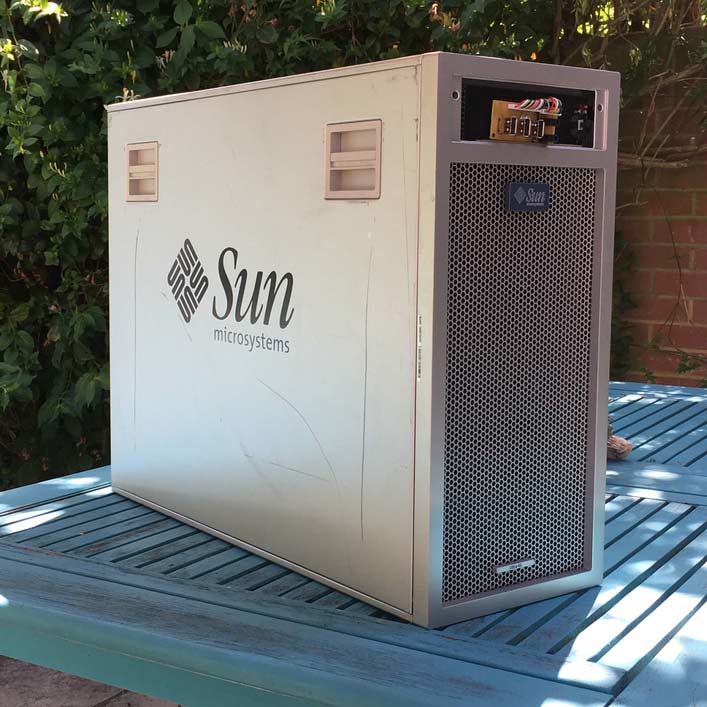 I was lucky to get my hands on this chassis empty off ebay for £30. Unfortunately it did not come complete in all its SPARC glory.

There are many methods for achieving this. I would consider it the stage that requires most planning. Depending how you do this will affect how any PCI accessories will mount if at all, and will determine how much space you have left over in the chassis.
Personally I found the simplest and most fail-proof (and laziest) way of mounting a motherboard would be to use an already fitting backplate from another standard ATX chassis and mount this to the Ultra 45 like an adapter. You can see the a demonstration of this in my video above. Others have tapped new standoffs directly into the Ultra 45. This is by far a more elegant solution and will require a little more effort. See how this can be on Trung Lê's YouTube video. 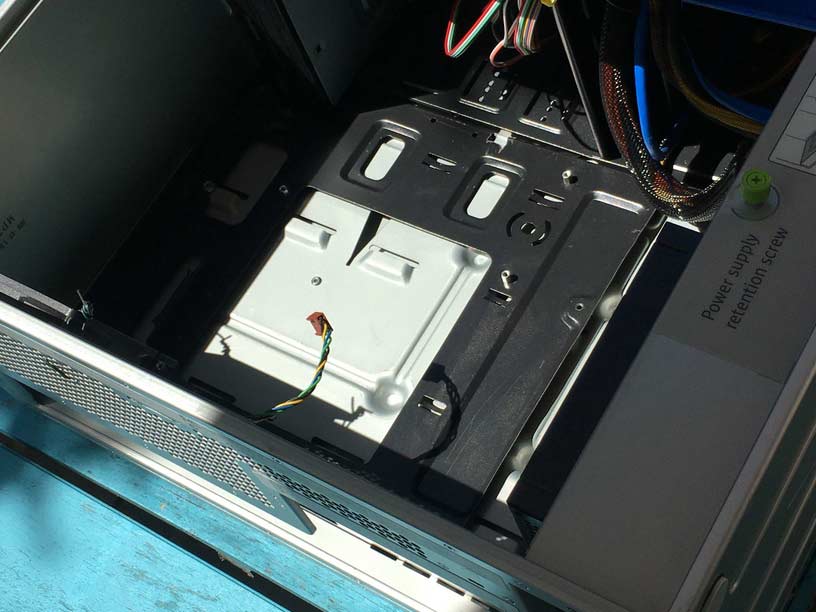 Only a lightweight GPU is featured in my build, I could replace this with a heavier GPU since this PCIe accessory is fixed against the chassis' PCI expansion slots; it will hold stable.

The front Io slot was once occupied by an optical drive, front io ports and buttons. The Chassis I purchased did not come with this panel. The slot will barely fit a 3.5 inch bay accessory such as a standard optical drive. There will be however, minor gaps and it is a very tight fit. To allow an optical drive and most 3.5 inch bay accessories cutting and removing fairings from the inside of the bay is required since some plastics and metal stick out in the way. This space is tight and will be difficult to modify. This space can be seen towards the end of the video above.

The Sun Ultra 45 will fit a standard ATX PSU upto great lengths. The issue though, is that it will not be flush against the back of the chassis since the original PSU was shorter than the new standard ATX size. There will be a gap. This means that you will not be able to screw in the PSU without cutting some of the protruding metal. Fixing the PSU in place to stop it from moving around will require improvisation.
There is a green thumb screw and slider on the bottom of the chassis. This is only for the original PSU and will not fit any other. They will not obstruct any standard PSU.

Connecting HDDs/SSDs via the original Backplane

The Sun Ultra 45 backplane has four SATA connections for storage drives. This board has an SCSI SFF-8484 connector which can be converted to four separate SATA connections via an adapter. This and powering the backplane are further explained in Trung Lê's YouTube video.
The build featured in the above video does not use the original backplane.

There are no mounting screw holes for any fans throughout the chassis. The original build has proprietary fan modules to control airflow. Mounting fans will require improvisation. There are enough grills and holes to figure something out. 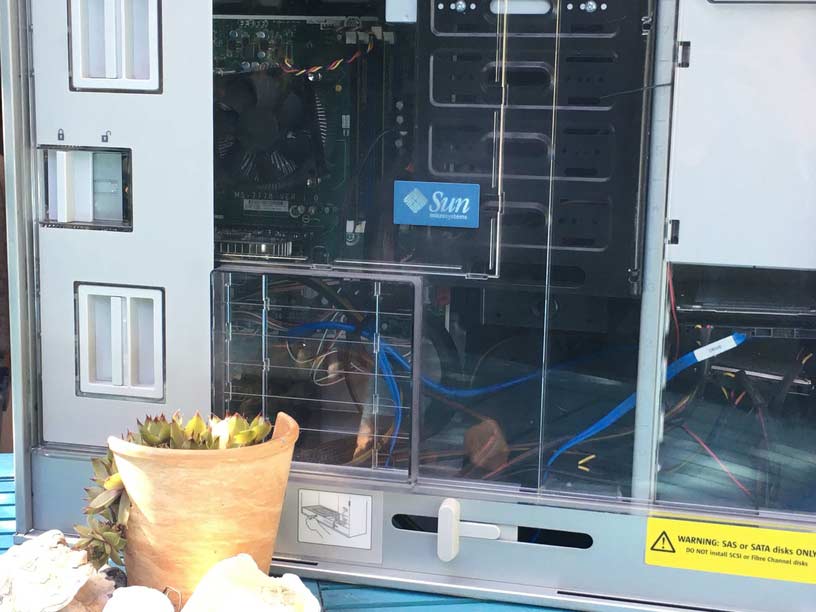 I hope this information helps if you are attempting a similar project.

I will only mention some notes regarding this particular setup I put together. If you are considering attempting an EGPU build of your own I reccomend reasearching the topic and finding similar already completed builds with success on the EGPU.io and Reddit EGPU forums. There are many factors you will have to consider when venturing with EGPUs as there is so much uncertainty throughout the entire process. 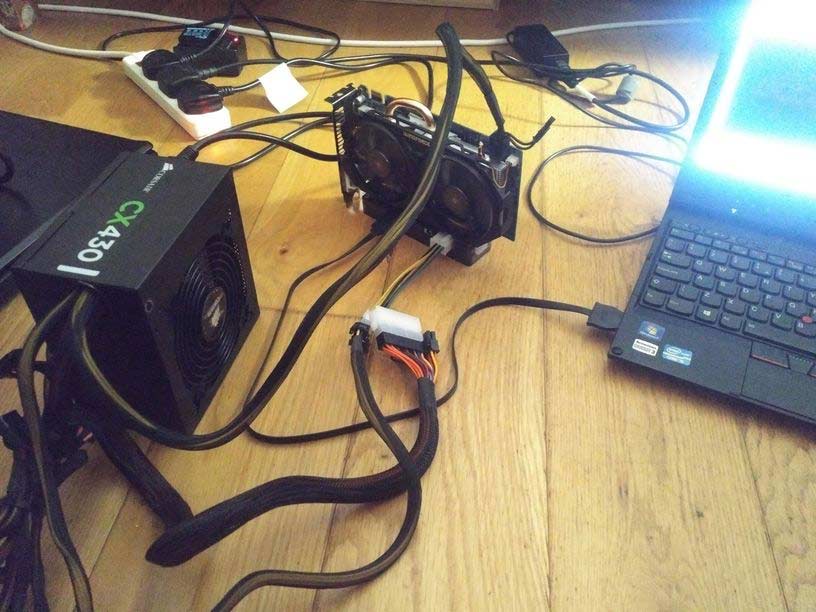 The Thinkpad x230 tablet happens to be quite a good candidate for expresscard EGPU solutions compared to many others in the same category. The Generation 3 Mobile CPU (not Ultrabook CPU) is a very good performer despite its age and power consumption. Compared to many other laptops with an Expresscard 34 or 54 slot, the Core i5-3320m is among the highest performers. This will reduce bottlenecking when using the laptop with an EGPU.
It is highly reccomended when using any of x/t_20/30 Thinkpads to only install 8gb of ram maximum. It is generally accepted that by installing 16gb on these models, issues will undoubtedly arise when egpu-ing.
Generally the trend is: the older the GPU, the less issues you will have during setup and compatability. Pascal based Nvidia cards are to be avoided due to compatability, however are sometimes workable. Most Nvidia cards can output to internal and external displays whilst AMD cards will only output an image to an external display. This is not much of an issue since using the internal display heavily bottlenecks the expresscard lanes making external diaplay use only viable in our situation here.
A common error to occur during setup is the error code "42". This is related to drivers. Through many attempts of trial and error for my particular setup Nvida Drivers version 381.65 had the least issues. Other known versions that are known to bypass this error is version 375.63. For Nvidia 10 Series Pascal cards with this error, versions 372.20 and 372.70 might do the trick.
You cannot hot plug an expresscard connection, You must restart the machine on connect and disconnect.
EGPU setups such as this are workable on linux, I havent tried it myself however. 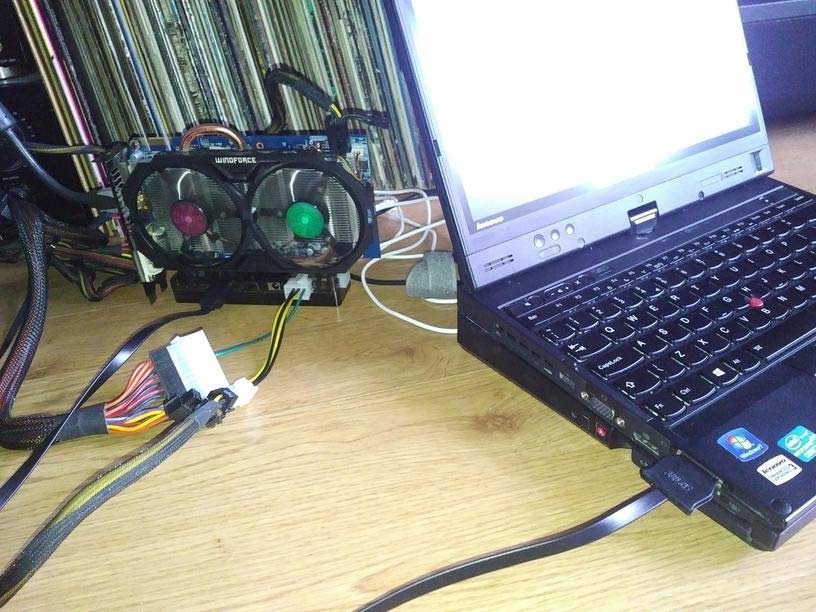